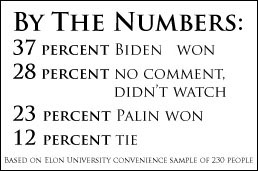 While Gov. Sarah Palin was able to connect with the American people, Sen. Joe Biden had more factual evidence and was able to come out on top during Thursday’s vice presidential debate, an Elon convenience sample said.

The event, which was the first time the two met, marked the only debate the two candidates will have against each other before the Nov. 4 elections.

While 230 Elon faculty, staff and students were surveyed, 37 percent said Biden won while only 23 percent said Palin won. Twelve percent said it was a tie and 28 percent did not watch the debate or did not care to comment.

Elon University junior Mary Robinson said Palin clearly lost, even though she did better than expected.

“People had very low expectations for her and she surpassed them, but just because she used certain catch phrases doesn’t appeal to me,” Robinson said. “I don’t think Palin really showed that she was well informed on the questions she was asked. She made a rebuttal with information that turned out to be false in regards to the surge in Afghanistan and actually got the general’s name wrong.”

Elon University Senior Tim Graham said Palin hardly answered anything while hawking the necessity to talk “straight up” to the American people.

Ashley Flanagan, an Elon University junior, said each candidate won in his or her own way.

“I think that Palin had really low expectations and she did a good job, seeing that she had such low expectations,” Flanagan said. “But I think most people would probably say that Biden won based on his experiences and stuff, but I think Palin held it together.”

“I think Joe Biden had some really good points and was able to back up his opinions with facts,” Kuekes said. “Palin’s factual evidence was not as strong, but her style was really appealing to some people.”

“I think she looked like an idiot because she didn’t answer most of the questions she was asked and just went off on her own and said what she wanted to say, not answering the question,” Prilutski said. “She also was not very eloquent and came off looking stupid — from my educated opinion — with all her ‘folksy’ sayings, aka comparing the economy to a soccer game. I understand why she did it, but I think the U.S. economy is a bit different than a soccer game.”

Elon University Senior Katie Kuekes said the debate was a close call, but in the end Biden had more factual evidence to support his opinion. Watch below to hear more.

Elon University Junior Ashley Flanagan said Palin performed much better than she thought she would, but that Biden brings more experience to the table and it was evident during the debate. Watch below to hear more.