Younger and younger Alamance County residents are weaving themselves a life to find a family the only place they can: gangs 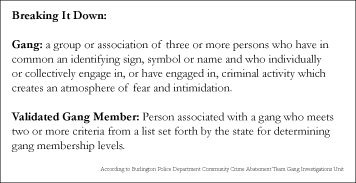 The program, which acts as a support group for at-risk students who’ve demonstrated inappropriate behavior, has been instituted to curb problems at an early age before they blossom into more severe issues, namely gang involvement, according to the School Improvement Plan for Hillcrest Elementary.

“In fourth grade there’s a lot of verbal assault, in fifth grade it’s more physical,” Keldie said. “A lot of boys are getting immersed into gang culture, not into gang life. But you can tell they’re picking up on the language of gang life and you can hear the way they’re talking and starting to verbally assault each other.”

While Keldie hasn’t heard many students talk directly about gang relations and has been instructed to report anything she may overhear or witness, she said there also seems to be a “don’t ask, don’t tell” policy.

Some students, like one that threatened a Hillcrest teacher last year, are asked to join the all-boys club. Other boys, like one of Keldie’s current students, have requested to remain in the program after previously participating and realizing its value.

“They see [gang involvement] in their homes and neighborhoods and that’s what they know and think is the norm,” Keldie said. “They don’t know there are other approaches of handling situations and interacting with people.”

It evident there’s a community issue when thoughts and actions revolving around gangs can be found in a fourth grade classroom, Keldie said.

But with 65 identified gangs in North Carolina — and the youngest known member is 9-years-old — establishing programs like these is imperative to combating the problem, according to the Alamance City-County Gang Task Force. They estimate more than 400 individuals are involved in some form of gang activity across the state, with 56 percent being under 18.

More than half of gang-related crimes were committed by juveniles under 18 between July 2006 and December 2007 alone, illustrating that the youth needs to be immersed in educational programs before they’re fully introduced to gang life, Randy Jones, director of public information for the Alamance County Sheriff’s Department, said.

Dwayne Harden, chairman of the Juvenile Crime Prevention Council, said he has seen court intake gradually increase with gang-related, juvenile offenses during the past four years.

According to Harden, between 500 and 600 juveniles are referred to Alamance County’s Juvenile Justice System per year. Out of those cases, between 250 and 300 are put through the court system.

While graffiti, assault and arson are the most common gang-related crimes, Harden said it takes between six months and a year to fully complete a rehabilitation program before the offender is ensured their record will be expunged once they turn 18.

Those who violate the court order are brought back into court and given more consequences.

But since Alamance County has a higher average of juvenile crime than the state average, another effort instated to combat this rising problem is the North Carolina Metropolitan Coalition, which was created in 2001 by several North Carolina area mayors, including Burlington Mayor Ronnie Wall.

After recognizing the impact gang activity was having on local communities, the coalition formed to prompt state legislators to pass anti-gang legislation that would be in affect across the state.

“The NCMC recognizes that a balanced approach of prevention, intervention and suppression is needed to address gangs and supports both bills,” a NCMC statement said. “[These laws] create stronger punishments for criminal actions and allocate funding for prevention and intervention programs.”

“Not only will this legislation give cities and towns across North Carolina additional tools to prevent and suppress gang activity, but most importantly, they will help save our youth from the insidious nature of gangs,” Coalition Chairman and Chapel Hill Mayor Kevin Foy said to WRAL.

Fraternizing With The Escalating Enemy

Jones saw the issue growing around the same time as the NCMC and helped to pen the grants that established the first gang unit in Alamance County in 2005. He eventually led the unit to become part of the regular budget.

But as intelligence information developed, Jones was shocked by the problem’s magnitude.

“I found out I didn’t know as much as I thought I did,” Jones said. “I thought we had a bad problem. It was about four times worse than I thought.”

While the task force has three full-time members, he said he could justify 10 in a grant after seeing the extent of the problem.

With a very fluid gang culture, the research being conducted is a “never-ending ordeal,” since it’s a major failure in previous investigations, he said. The team also does undercover work, specific investigations, makes community presentations since the school system is main recruiting grounds and gets school officials to participate in training and recognition sessions.

While there are a variety of gangs in a county of only 155,000 people, many are localized and take allegiance to the history or criteria practiced by other gangs, Jones said.

Many have also moved from major cities to rural areas, such as Alamance County, because there’s excessive anti-gang action and enforcement happening in metropolitan regions.

Jones said gang officers have to develop their own street credibility, interact and constantly interview gang members. Most times, members come straight up to the officers because of bragging rights and wanting their information to be known, he said.

“It’s perpetuating because people get recognized and think it’s great,” Jones said. “It’s how intimidation works. If you’ve never heard of them, then you don’t know the name.”

He said one of the Task Force’s main goals is to give school officials a basis of what to look for, since part of their lack of knowledge feeds into the problem.

In one Alamance County high school, there was a school newsletter distributed with a photograph of seemingly innocent students gathered. But once trained officers looked at the picture, they realized the students were flashing gang signs and delivering gang messages through the image.

While training to identify the problem is one measure being taken, another is to educate non-gang participants on their safety.

Elon University Senior Libby Long, a member of Alpha Xi Delta sorority, said one of her advisers who works in the Alamance School System talked to her chapter about being cautious.

“I’ve never been exposed to gangs in my life. I didn’t expect there to be a gang issue here,” Long said.
Long and her sisters were instructed to be careful about shopping and being alone in parking lots at night, since it makes them easy targets as young females.

However, Elon University Senior Maggie Zimmerman said while she learned about the gang problem a year after enrolling in Elon, she normally feels safe and has not witnessed any gangs, gang-related crimes or graffiti around town. She said her feelings reflect the perspective of a majority of Elon students.

A Gang Does The Crime, A Gang Pays The Time

But even though everyone in the county doesn’t feel the gang presence, gangs are still prevalent and rehabilitation programs have been established to help stabilize juveniles once they are identified and taken through the court system.

Jones said he has a difficult time referring to some of the 14 and 15 year-olds he encounters as children, since they are “some of the most violent ones” the county is dealing with and they are committing “very adult crimes.” The maturity level of crimes being committed by 15- and 16-year-olds is now at the level of a typical 21-year-old from 35 years ago, when he first got involved in law enforcement.

Eric Thompson, a full-time ordained minister who works in the Burlington School System, has been connected with at-risk Hispanic youth in the area for more than 10 years. He created a rehabilitation program, In His Faith, four years ago in conjunction with juvenile justice after he noticed a need for the demographic when it came to gang offenses.

The group, which meets every Thursday, has three parts: a Biblical discussion, a karate potion to develop self discipline and respect for authority and adolescent fellowship to foster organizational relationships.

“I don’t like a lot of rules, but the rules we have are pretty solid. I’ve tried to make it very much non-confrontational, but very much try to make them think,” Thompson said about the all-male youth between 12- and 17-years-old. “It’s a gang-free environment for two hours.”

Here, those enrolled work on dealing with violence, building a reputation and more.

The Dance of Denial

Thompson said most kids begin to drift into gangs while they are in upper-elementary school, so most of them have spent years perceiving gang life as “pretty much it.”

Since youth worldwide tend to get involved for identity and protection, they often view these destructive organizations as something they will always survive and will not be affected by in the long term, he said.

But Harden said it should not always have to come down to these rehabilitation programs to establish a sense of well-being in adolescents.

“It starts with the family,” Harden said. “Parents need to get more involved in their kids home situation.”
Jones said not recognizing, denying or turning a blind eye only perpetuates the issue.

“People say we don’t have gang members, we have wannabees. But the wannabes are gonna be,” Jones said. “If they’re going to do everything a gang member does, then they become a gang member.”

Jones said another problem gangs present is the destruction of family systems, since around 95 percent of those involved — from all ethnic backgrounds — are raised by a single parent or other relative and experience a lack of discipline in home and school.

Richard Ramos, president and CEO of The Latino Coalition for Faith and Community Leadership in Los Angeles, has developed a curriculum to educate parents about gang culture, since he believes prevention — not intervention or police enforcement — is the key to curbing the problem.

While Alamance County’s problem is not atypical, he said the community if focusing on the wrong problem.
There are 760,000 gang members across the county, but out of the entire population, only 5 percent of youth have ever joined a gang, Ramos said. In the prime ages between 10 and 17, when youth are most likely already in or to become involved in gangs, only between 1 and 2 percent of all of America’s youth falls into this category.

Investigating why children do not join gangs will reveal why those who are involved chose to do so, he said.
“The reason most kids do not join gangs is because of the home they’re raised in,” he said. “It seems very elementary, but we’re somehow overlooking it. When it comes to prevention, we’re leaving out the support of the families.”

Communities are usually not very educated about gangs, know any gang members, are scared and under political and social pressure, so they often demand to have action taken right away and believe law enforcement suppression and community standards are a necessity, he said.

He targets to educate young couples — with and without children — because while intervention is good, Ramos believes prevention is better.

But he said the war will never be won until the problem is addressed and accepted by the community and heavy resources are poured into prevention and rehabilitation.

But don’t expect this anytime soon.

“Are we going to get rid of it? I’m afraid not,” Jones said. “And the reason we’re not going to eradicate it is because society’s not willing to.”

2 thoughts on “The seed of the need for acceptance, security planted by blind eyes”